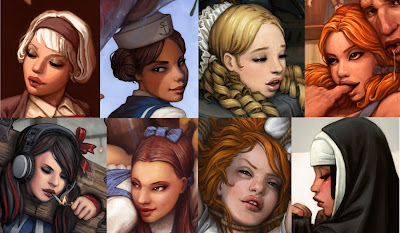 Whoa, those kind of people really make me wonder; why so jealous?!
I can't think of any other explanation for your anonymous co-worker.
This girl likes what you're doing, keep up the good work! :)

Sexual violence? Seriously?! Now, that's a load of crap!
I as a girl have never gotten any vibe of abuse, violence directed towards women or whatsoever from your pictures. Actually, I think that most of the women you portray are depicted as being quite strong personalities.
At times, I just don't understand how people end up with assumptions like that. But you know - there will always be people who don't like what you do and who WANT to understand it the wrong way.
Don't let it get you down!

What?! Please Continue on your way and pay no attention to what they say who is envious of you!

That really sucks Ben. People can be such tools.

MORONS! I bet it was some :religious: type or PC do-gooder.

Sorry to hear that, it really does suck.

Some people can be real douche bags.
Anyway, your work is inspiring and creative and in no way violent.
And I wish upon your nosey co-worker many uncomfortable paper cuts.

That's bullshit. Sure, I'd understand if you were drawing during work hours, but if it's your lunch break you should be able to do what ever you want with your time.

err People can be so damn stupid sometimes, I think that people who are alarmed by this kind of things, is because they feel self-conscious about themselves and they take refuge in prejudice against others...

anyway, I´m a girl and I would never think of "sexual violence" looking at your work, i love it.

thanks everyone; I appreciate the nice comments.

Sorry to hear that Ben don't let the bastards get ya down! Presumably you could still draw slightly less pervy things. (awesome predictive text freudian slip there - my phone suggested "less pervy thongs" :)

Its a shame some people can't seem to grasp the difference between fiction and reality. I wonder if they also call the police whenever someone gets murdered in a book.

Your work is fantastic, all the Lucha team love it, all the Resistance Gallery posse love it & the complainee is obviously a sex starved no nothing agent of the state!
xVx

Oh please, such hypocrtes! I am a woman and there is No violence in your illustrations... incredible...
Chiara

Sorry to hear about the set back ben..
About a year back my offices changed from one location to another. This meant I went from having a quiet secluded corner of the office to basically being right out in the open... Needless to say I feel for ya' man...I'm always a little conscious now of the people over my shoulder..

What a jealous idiot. You are very talented and your art ist amazing. Keep up the good work. I hope your job is not at risk.

That should be like, a crime.
To keep an artist from arting, damn.

This is obviously a sign that you should start drawing crazier stuff. xD

I really hate it when the sheepwalkers spill over into our lives. People need to learn to keep their issues to them selves. Sounds to me like said person has a secret fetish or issue they need to work out. haha.

Keep up the great work!

From pro to pro, your work is amazing. Draw what you feel. I hope that the posts still keep coming. I love your concepts and takes on them. Keep it up Ben. I hate the coworker that you are with.

People are stupid. Your art is rad.
And thanks for checking out my blog.
Tao.
decapitate animals.

Wh? Wh? Really? Wow buddy! What is it with you and mormons? You attract them or something... Not cool but then again there will always be a douche that has something to say about something they obviously don't understand! Too bad it fell on ya this time bro!! I think it's more insolence, like ... Too many people think that their personal moral code is universal! If you don't like something, sure, I can understand, but then just don't look at it! Why do you have to make it stop just because YOU don't like it!? I don't know, it's just weird to me... There's a bunch of stuff I think is way wrong on the internet for my personal taste but I still don't think they should stop posting it just because I don't like it ... I just don't have to go search for it!

Anyways ... Hope you're not too bummed buddy! I'd be looking around the office for someone with framed pictures of cats doing cute stuff (like playing in a band, smoking in the bathroom ...) at their desk or something like that ... Accounting or maybe expenses ...

Another girl here. Only today encountered your work. I love it. It's creative, stimulating and full of fun & energy.

Hey there Ben - this is real shitty news. I come across the do gooder moral jobs worth squad a bit now and then too and they do my head in. It's amazing what people get their knickers in a knot about really and often, if they just spoke to the artist perhaps they would gain an insight as to what the work is about and learn from it. Some people need to get free.

Keep on keeping on.

Well that is not right! Your work is great!

This girl wants to see more and more.

http://3.bp.blogspot.com/_5anxFI3fbbc/Sgco0YzsZfI/AAAAAAAAATQ/Cdowi3T1igo/s1600-h/bennewman_dirtysnow_small.jpg
That piece is my favourite. Keep this up.

Looks like I will be the only dissenter here. It was at work, during work hours (it doesn't matter if it was during a lunch break). The simple matter is, it's easy to believe that someone might be offended by this type of art, so 1: don't do it at work, or 2: don't let other people see it at work.
This is akin to BROWSING this sort of thing at work. Many places will get you fired for even having this on your screen for a second.

Nicnac: While you are correct to a certain degree, I work in a computer games company, and as such I'm often called upon to draw pictures of sexy women and regularly have nude images up on my screen for anatomy study.
My issue was not with the label "sexual" which I hold my hands up to, but with "sexual violence" which is a very different accusation in my eyes.

Please never stop!!! I'm a woman and LOVE your beautiful, perverted, sexy ladies.
Your work is awesome.
And jealousy sucks!!!!
hello from Brazil.

Thanks Panda! hello from sunny Blighty!