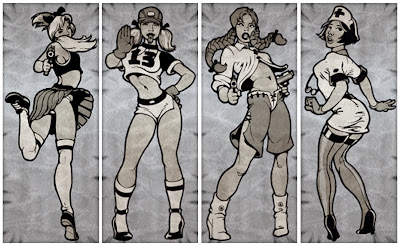 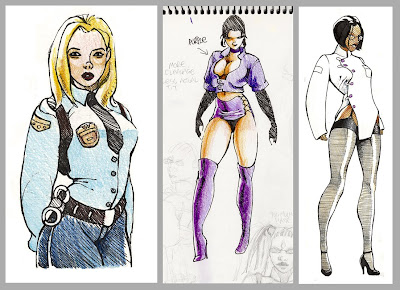 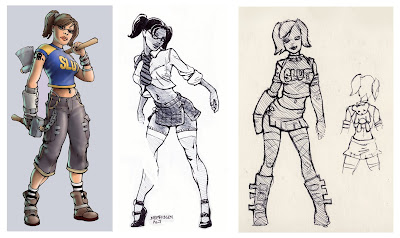 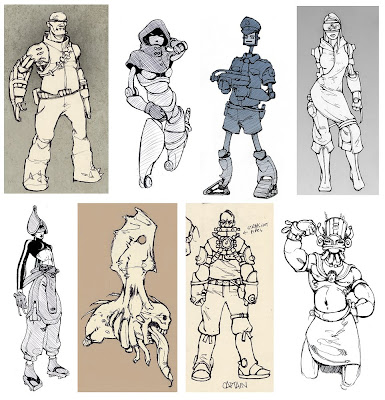 Needless to say, me and my missus had quite a good laugh about all these.
More art soon.
Posted by Ben Newman at 1/10/2011

It's a great batch of drawings, and I'm particularly impressed with you backtracing where your fans have come from, and putting up a post for them.

I also LOL'ed a little bit at the shoe-horned-in-reference to your missus; proof that you're not a vicious, women hating sexually frustrated yob ;) don't worry, the cyberpolice are onto you. Consequences shall never be the same again...

The comment about the cleavage on the lady in purple made laugh so much.

Haters are always good for a laugh with their jealous pettiness, glad you and N know that. Cheers my friend. - Kronos

That's awesome buddy! Those sketches are super!!
But WOW! Where did these comments come from??? They're awesome ... In a Mormon kind of way!! Hah! Gold I tell ya! Now if you excuse me ... I have to go draw a giant vagina !

Thanks for posting these Ben. Much appreciated from the TimeSplitters site.
Even though there were negative comments, I like a lot of your work.

Hey, I just wanted to give you thumbs up from TS Portal. It's great that you leverage your talent for the macabre, horror and unsual themes so that people like me can appreciate your work. Keep your creative urges!

Greetings from a fan ;)

Wow that pictures are really nice.

Keep in mind, that just one person post that, what you quoted above.

A great character work you did for the games also. *thumbs up*

A user from that board :)

Other quotes from the same thread of the same forum:

"There's no doubt that he has great talent when it comes to his art.
Some of the stuff on his blog is fantastic and very artistic"

"There's obviously things that aren't to everyone's tastes, but if nobody pushes the boundaries, then who will?"

"I don't see how it's any less artistic than other pieces of art. Regardless of the content, the man is clearly very skilled. And even if you don't like the content, it's still more artistic than abstract "art" where randomly jumbles of shapes are put together and claimed to mean something"

"When looking at Newman’s work, you can’t deny its genius. The man does have talent for drawing and from a sheer esthetic perspective, the style is definitely captivating and rather unique, I dare say"

it's me anonymous again :P

I just wanted to ask whether this is your profile on deviantart http://bennewman.deviantart.com/ and if so why you haven't posted anything on it yet?

Oh and on a side note, could you give us Timesplitters fans an insight about how character development at Free Rad actually was like?

Well, hello there. It's your reader from Newcastle.
I didn't come to you from the TS forums but it is due to Time splitters.
TS is one of the greatest first person shooters ever. Much better than a lot of other games that were more "successful"
I think the only reason every kid in the world doesn't know about it, is because the developers didn't have the millions to throw at advertising.

I've played Halo, and, well, all the others and the TS series is streets ahead in two key areas...

Humor, It's funny, why can't games be exciting and funny? ("You've been killed by Robot lewis Stevenson"!)
And Character Design, Sexy, YES, But also stylised, we now have games that look like films, that is cool, but where do you go from there? Everyone in the splitters games looked so cool! (even the guys)

I was so impressed I did a lot of digging to find out who drew those awesome characters.

I don't comment much because what am I gonna say.
"Great again" "Wonderful as usual" "Still Great" "Wonderful again"

Just take all that as read.

Thanks for the comments everyone; I know the quotes that I used were fairly biased, but the nice ones weren't amusing! much appreciated though.

Well dear, the day you stop drawing raunchy, half naked sluts, I'll stop lurking you. ♥ You do fantastic work. Needless to say, I never played the game, but a good deal of your character art is ingenious.

I also find it hard to look at your work and be disturbed, what with some of the crap floating around the internet.

The average person is an idiot and not qualified to give an opinion about anything. They should just keep their mouth shut until they bother getting an education.

I'm tired of seeing people who clearly have done zero research into anything talk as if they are the end all experts of life and everything in it. Ignorance is forgivable, stupidity (refusal to learn) is not.

That said, you aren't my favorite artists out of the thousands I collect from but you definitely aren't as bad as a few of those comments imply. Keep improving and keeping doing what makes you happy.

I always liked the FR style, especially the visuals. I'm a big FPS fan and few companies apart (Monolith before they released FEAR and Xatrix’s Kingpin), no other developers ever paid as much attention to shapes, movement and attitude when designing characters.

(And now, I remember how your blog got into my bookmarks :D)

You're art has captivated me since I first player TS2! in fact, I would go so far as to hold you responsible for giving me my robot fetish, which stemmed from Gretel Mark 2.

I just saw a game mag with a rumor of an announcement for TimeSplitters 4 coming soon. Though you probably can't comment on such a thing, I'm keeping my fingers crossed that your art direction will show up in there somewhere, as it just won't be TimeSplitters without your character flare and art style.

Hey StressBear! well, I don't work there anymore so I'm fairly free to comment... I don't know how tied to the original trilogy the new game will be; I've heard rumors that it might be a sequel in name only, but I guess we won't know until they start showing some stuff! Hopefully they'll keep the silliness of the originals, but who knows. Fingers crossed!