I thought I'd stick most of my more finished pics in one post so that people didn't have to trawl through all my other junk to find the goodies (although you can if you want to of course!)

"Suggestible"
I did this one specfically for the Bizarre competetion, although it turned out not to be the one they liked best. This pic took me ages, mainly because of the amount of different elements going on. Personally this is one of my favourite pieces. 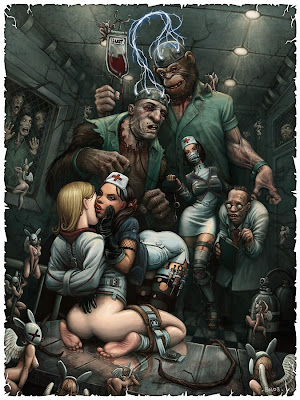 "The Devils Harp"
I found a load of cool contortion pics and decided to do this pic based on them. Something about the snail-like shapes of her folded body visually appealed to me, and having her strapped down just added a bit of extra kink. I was imagining a field full of these strange humming contraptions in a raging storm, like a modern day wind-farm. 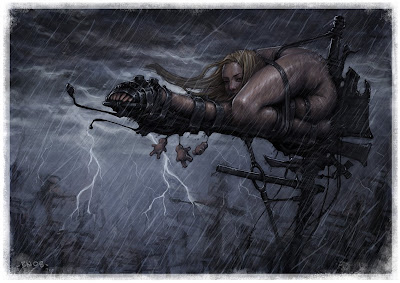 "Daddy's Girl"
I was trying for cute but disturbing at the same time, but I can't decide if it worked or not. I wanted people to think "Hmm, she's pretty attractive; wait a minute...she's got tentacles coming out of her eyes!". But it's probably obvious straight away to most people... I still like it though. 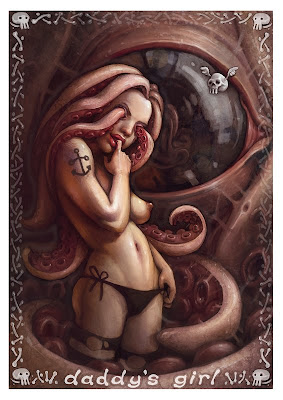 "Eeny Meeny"
I think this is probably the filthiest of all these pics. I like watching peoples reactions when they work out what's actually going on. Always make me smirk! 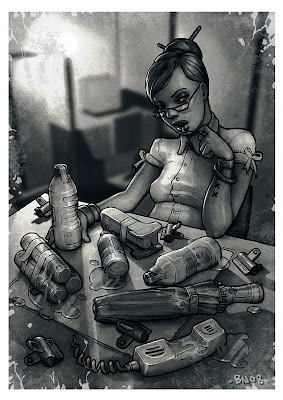 "Goldilocks"
This ones fairly self explanatory. It was nice playing around with the shadow elements in this one, something I should probably pay more attention to in my drawings. 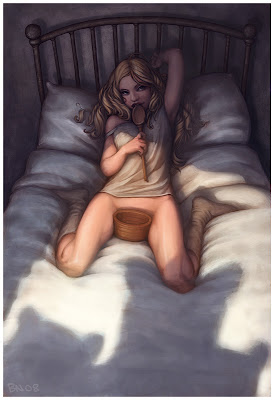 "Lie To Me"
I wanted the girl in this to appear really predatory in contrast to pinochio's innocence; she's got one thing on her mind and she's determined to get it! I was going for a dingy back-alley feel to this one but can't tell if I pulled it off or not. 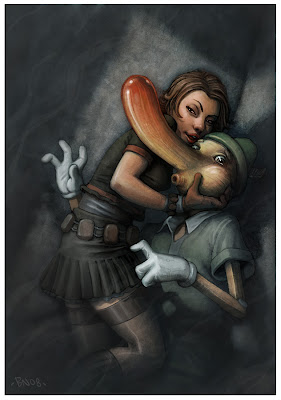 I can't believe there are no comments on these pieces.
Your work is so inspiring. Absolutely love Suggestible and Devil's Harp.
Awesome work man, keep it up!

I loved your Wizzard of Oz, won Bizzare. you truely are a master of the brush!
Keep going :D

Love the "Daddy's Girl" one. Cool concept. I'm jealous, I wish I could come up with something as cool as eye-tentacles.

this is some of THE BEST ART I've ever seen

Suggestible led me to your site. Amazing work!

(It might behoove you to stick a link on the bottom of your pics so that when someone scarfs one up, people know where to look. True, it won't stop the most determined who will edit or crop, but lots of people just grab things they like and lose track of the sources.)