I finally got around to finishing this pic I've been working on in fits and starts for the last couple of weeks; 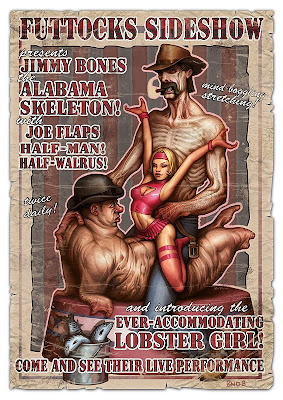 I thought as well that I'd write a bit about the process for anyone that might be interested; if that's not you, just look at the pretty pictures! 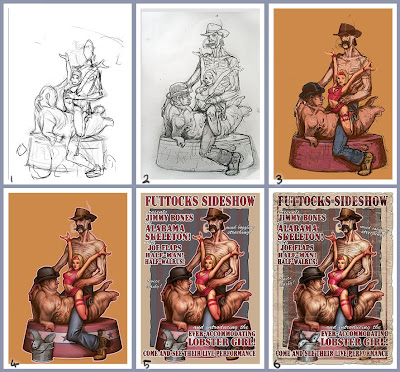 1. The initial sketch, done in photoshop. I often work out rough posing and composition in photoshop, because its so easy to move elements around and mix stuff up. I did about about ten of these quick pics before settling on this one.

2. Using the sketch as reference I drew out a more final (but still quite rough) pencil version on A3 paper. There was no point me getting too carried away at this stage, because I knew that very little pencil would be left by the time I was finished with the image. When that was done I took a digital photo of it and brought it back into photoshop and tweaked proportions and composition.

3. Chucked on some basic colours, trying for a fairly earthy/autumn colour palette.

4. From here on in it was mostly a case of refining the shading and a bit of tweaking. I decided to add a bucket of fish to add to the story.

5. More shading, added the letters and starting to finalise the background. I like coming up with names for characters, I think the right name can add a lot of personality; it must come from reading too much Mervyn Peake as a kid! I decided to call the whole thing Futtocks sideshow because it sounds rude even though it's not.

6. Done! I added some texture overlays, torn edges and a drop-shadow under the paper to make it look more like an old poster.

and here it is in hypnotising .gif form!

I've got a couple of other ideas that I'm going to get started on soon, but I'm also working on something a bit more time consuming at the minute, but hopefully I'll have new stuff to show soon. bye.
Posted by Ben Newman at 10/23/2008

crazy work you got here. Great style and imagination.

man, I see great and sick work here. love it.

Beautiful! Do you sell prints?